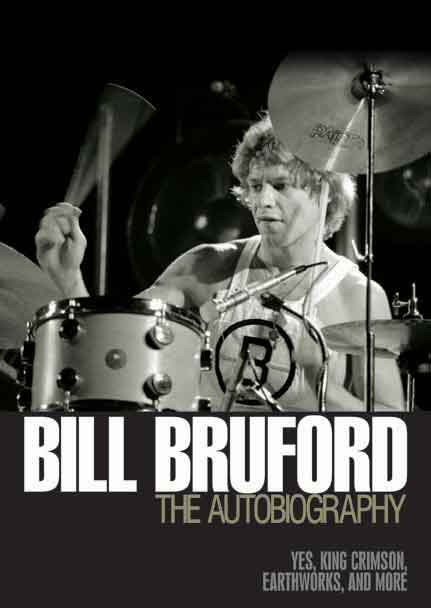 Ever since I’ve read Miles Davis’ autobiography I’m a sucker for that kind of biographical books. Over the years I’ve read many of em, like for example the brilliant ‘Life’ about Keith Richards or Dave Mustaines grim tales. But never I’ve read a self written autobiography by a musician this erudite and well written. Bill B single handedly kills all the funny jokes about dumb drummers. It’s actually written as a bunch of answers to often asked questions and assembled smartly so that it reads as a biography. Instead of the often dull first couple of chapters about childhood and then following the timeline until a certain moment not to long ago, this book switches back and forth in time, mixing stories about King Crimson and Yes with his later adventures as a jazz-drummer and musings about the modern day music industry…. It makes it a pleasurable read not only for fans of the mans music, but also for people interested in the mechanics of the music industry or just in a good read. The book tends to drag a little near the end, especially the musings about the insecurities of being an elderly statesman of rock compared to the young and technical very skilled drummers of nowadays. But all in all the book is interesting enough to read all the way to the last page. 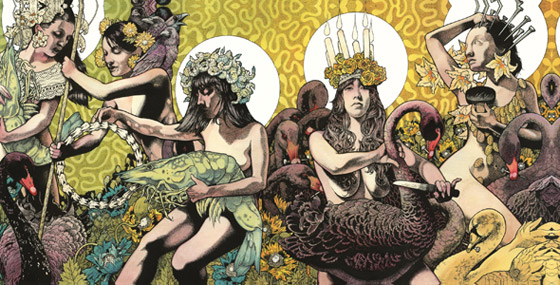 2012 has been a special year for me. Epic even. Definitely musically. There’s been a lot of brilliant releases. Lots of classics. To name but a few, Anathema, Katatonia, Van Halen, Paradise Lost, COC and RPWL released all some of their finest albums ever. Furthermore there were some fantastic new collaborations, like Storm Corrosion and flying Colors, and new discoveries, like Pigeon Toe and Crippled Black Phoenix. But one album I seem to revisit more then the others, even now, almost a year later. And thats Baroness’s epic Yellow/Green. Every day on my way to the gym I rode my bicycle listening to it and I never got bored with it. I read reviews saying it was a big step away from their previous efforts, but brilliantly the first song worked as kind of a bridge for me. A bridge between the old work and this album. The fantastic and moody ‘Take my bones away’ still gives me goosebumps every time I hear it. After that the album gets more experimental every song a step as it seems. The ‘second’ album is therefore very different from anything the band has ever produced. And less harsh. Specially the vocals. Speaking of which, the vocals are brilliant all the way through the album. Melodic, moody and full of emotion. This a big step ahead. The songs are all very melodic full with hooks and smart breaks and rhythms. Overall the instrumental playing is brilliant, the guitar and drums work very well together. But most important, there’s a soul in it. It gets to you. It stays with you. I still find myself sometimes singing ‘Take my bones’ in my head. The album became a friend. A companion through a beautiful but sometimes still difficult year. It takes a special album to become that. There’s only a few in my vast collection. And this one’s definitely one. So every music lover, be it rocker, metalhead or proggy, or even popfans, have to get this album. Its fantastic. Album of the decade for me! 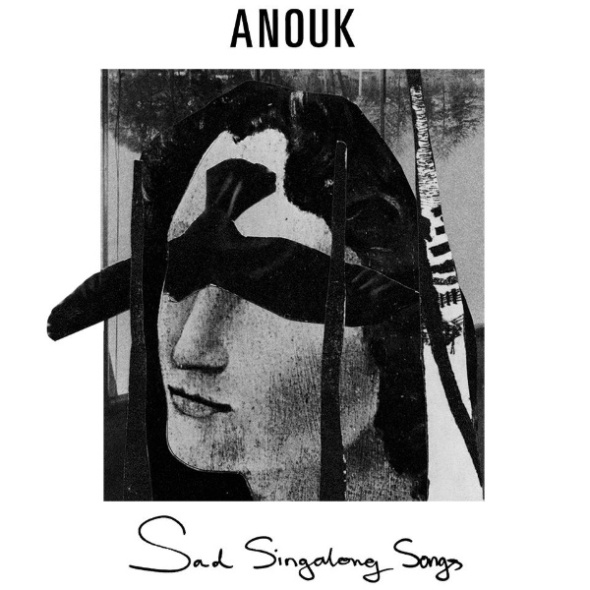 Actually my wife started out as the biggest Anouk fan in our house. Anouk is a dutch singer/songwriter/rockbitch and infant terrible of the dutch music scene. And she’s absolutely brilliant. The first couple of albums she released were nice, contained some really good songs, but were not really my cup of tea. A kind of poprock with lots of hooks, recorded by really good studio musicians with fantastic vocals. But it lacked something. It sounded perhaps too perfect. But the last two albums, ‘For bitter or worse’ and ‘To get her together’, both produced by Tore Johansson with Martin Gjerstad, I liked better. They were different, more ‘soulful’ and the songs stood out more. I really enjoyed those albums, although they were not very ‘rock’.

And now there is Sad Singalong Songs. I had read somewhere it would be a dark and somber album and it is. I had heard a couple of snippets of the song ‘birds’ with which Anouk would attend the Eurovision song contest. No I don’t understand contests in combination with music, I think it’s all a matter of taste, and I certainly never liked or followed the ESC, but this song I really liked and like. And guess what? It’s not even the best song on the album. But the rest of the album is certainly in the same vain. Dark, moody, pastoral, symfonic, elegant and strange. There almost no drums. There’s orchestra and choirs, and there’s Anouk voice. Singing about heartbreak and pain. And you can feel her pain. It’s brutal. I found myself a couple of times with tears in my eyes while listening to the album. Anouk’s voice never sounded better, never sounded more soulful. And never so full of pain. As said, it’s a dark album, but it’s also quirky and interesting. And not depressing. It’s different. And I love it. 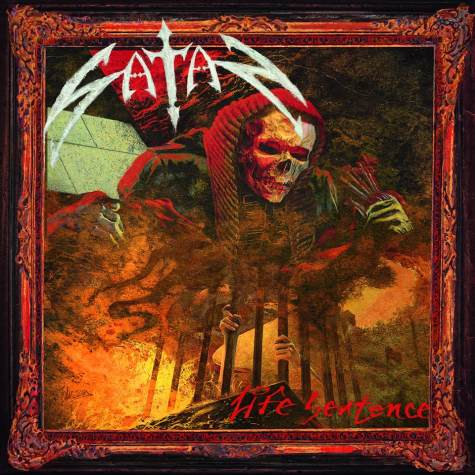 In the early eighties, as a young teenage heavy metal kid I was very much into the NWOBHM… Bands like Iron Maiden, Raven, Savage rocked my world. One of the most mysterious bands at the time for us was the aptly called band Satan. Now this was before black metal. This was just before Thrash metal (actually Kill em all and Show no Mercy where released later that year… the buzz was already there..). The name suggested kinship to the at the time very popular Venom but the music was way more melodic and in the league of Iron Maiden and such. I bought the album firstly because I liked the album sleeve very much. I kinda figured (and still do a little) that if a band was creative enough to choose a good interesting cover they must be good and creative and interesting. And they were. The album was fantastic. The music creative, exciting, loud fast and melodic and they had a quirky singer. I saw the band live later in my  hometown after they were renamed Blind Fury. They released some more albums as Satan with yet another singer (called Michael Jackson..) which I really didn’t like.

Now fast forward to 2013. They’re back. When I first saw the cover of their comeback album ‘Life Sentence’ I had a feeling this was gonna sound old school. And it does. In a good way. The music sounds as if it was their second album. The same fast pace, the same melodic quirkiness, the same singer. Only the sound is way better. I really like the production. It’s crisp, you can hear the instruments very well and you can actually hear the singer and that he’s really good. Very melodic and with lots of feel. He actually is, together with the guitarplayers though,  responsible for the recognizable Satan sound. The songs are well written and the guitarwork is fantastic. What I really like about a lot of the NWOBHM bands is that the guitar-players are not only good soloists but also the riff work is creative. I’m kinda missing that in a lot of nowadays metal. Interesting and odd cords, twinwork and strange, interesting rhythmic changes. All that is on this record in abundance. It makes this album a real pleasure to listen to. Nostalgic but still contemporary. Fine album. It’s good they’re back.

So it has been decided. In my head. The best King Crimson album for me is Red. I just ordered the 3 KC studio albums with John Wetton on it. So now I’m allowed (once again in my head) to listen to them extensively. The first ever KC album I bought was the Nightwatch, a recording of the concert in the Amsterdam concertgebouw, of which many pieces where used for the ‘Starless and Bibleblack’ album. So I was familiar with the style when I first listened to this album. John Wetton has been a hero of me for quiet a long time, ever since I first heard the ‘Night after Night’ album of UK. But here on this very album he’s at his best. The bass-playing is magnificent. It’s eerie, heavy, distorted, mysterious, tight, and loud. Together with drum-master Bill Bruford he leads the   band through the songs. Fearless. Ferocious. And then the voice. He’s got a strong, melodic and warm voice and he fills the songs with beautiful, memorable melodies and hooks. Fallen Angels, sort of a ballad, must be the most beautiful song ever recorded by Crim. Or maybe Starless. It’s a draw I think. They’re both stunning songs. Touching, melancholic, beautiful. Then there is ‘one more red nightmare’, a haunting song, again with fantastic vocals. And the strange and eerie electronic percussive sound*, which at first I found anoying, later intriging and now quiet brilliant. Especially when in mingles with the guitar soli of Fripp and later the sax. What a fantastic and adventurous song. The opener, Red, is a typical Crimsonian intrumental song, haunting, heavy and beautiful. Providence is a strange sounding intro for Starless. It reminded me a little bit of UmmaGumma. Eery, mysterious, clearly improvised.

So it’s been decided. Best album of one of the most brilliant bands ever.

*I recently found out that the sound was a  ‘scrapped’ cymbal  Bill found in the thrash of the studio, left there by the previous band, all bend and crooked.